The Endocannabinoid System: A Deeper Dive

My last post discussed CBD in a very practical way. The goal was to provide enough information to allow you to make sense of a tidal wave of confusing data.  Now it’s time to start going deeper into some of the most relevant topics surrounding CBD.

To understand CBD, some knowledge of the Endocannabinoid System (ECS, mercifully) is required.  Like all of my posts, this one is not an attempt to provide an exhaustive scientific explanation but rather an accurate description, with plenty of links, that will let you understand CBD more fully for yourself.

The reason you need to understand the ECS is because it is the part of our bodies that allows us to actually use CBD. 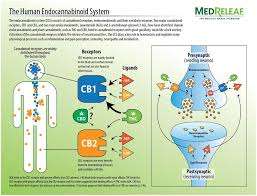 The [ECS]—named for the plant that led to its discovery—is one of the most important physiologic systems involved in establishing and maintaining human health. Endocannabinoids and their receptors are found throughout the body: in the brain, organs, connective tissues, glands, and immune cells. With its complex actions in our immune system,nervous system, and virtually all of the body’s organs, the endocannabinoids are literally a bridge between body and mind. By understanding this system, we begin to see a mechanism that could connect brain activity and states of physical health and disease.

That’s some pretty serious stuff and that’s why it’s important to have an understanding of the ECS.

Cannabinoids were largely misunderstood until recently.  In 1895 the first plant-based cannabinoid, cannabinol or CBN, was discovered.  In the 1930s the structure of CBN was elucidated and its anti-inflammatory and anticonvulsant properties were demonstrated.  Cannabidiol (CBD) was discovered in the 1940s.

The research in the field really picked up in 1963 with the work of Dr. Raphael Mechoulam, a biochemistry and medical researcher at the Hebrew University of Jerusalem.

While studying plant-based medicines it occurred to Mechoulam that although morphine and cocaine had been isolated from the plants from which they are derived over 100 years earlier, the chemistry of marijuana was largely unknown.  After obtaining some hashish which had been seized by the police (how’s that for dedication!) Mechoulam was able to isolate and describe the chemical structure of cannabidiol (CBD) and tetrahydrocannibol (THC).

THC is a lipid.  However, in 1964 all of the known neurotransmitters were water-soluble molecules. It was thought that a lipid like THC couldn’t attach to a receptor on a cell membrane like other neurotransmitters. Translation:  the 1964 understanding of neurotransmitters ruled out lipids such as TCH.

Back to Mechoulam.  It didn’t make sense that our bodies would develop sensors for cannabinoids if they were only found in plants which would rarely if ever be ingested.  This led him to the discovery of two cannabinoids occurring naturally in the body (hence the name endocannabinoids).

So it is with the ECS.  There are two receptors in the ECS:  CB1 and CB2.  As with opioid receptors, when they come into contact with cannabinoids they release neurotransmitters.

CB1 receptors are located primarily in the brain in regions which affect many of our high-order behavioral functions such as learning and memory, decision making, sensory and motor responsiveness, emotional reactions and other homeostatic processes.  Homeostasis is the state of steady internal conditions maintained by our body to allow us to function; this, in turn, effects many other aspects of our physiology.

CB2 receptors are found primarily in the peripheral nervous system, the immune system and the gastrointestinal system. Their activation has been shown to have strong anti-inflammatory and anti-convulsant effects.

The most interesting aspect of the ECS is the wide range of physical and psychological functions it is a part of. With CB1 and CB2 receptors located throughout the body, the ECS affects many aspects of our physiology in ways that aren’t completely understood.

A good example was the weight loss drug Acomplia, marketed by the drug company Sanofi. There are high concentrations of CB1 receptors in the hypothalamus, our body’s feeding control center.  This is why THC causes “the munchies”.  The thought was that a drug which prevents activation of CB1 receptors in the hypothalamus would reduce appetite and result in weight loss.  And it did. However, it knocked out CB1 receptors throughout the body, including those in brain regions which regulate emotions. When the drug was released it resulted in serious depression, including suicidal thoughts, in some patients.  The drug was pulled from the market.

The benefits research has shown we receive from cannabinoids – reduction in seizures, anti-inflammation, stress and anxiety reduction, restful sleep,improved blood pressure and more – occur in our bodies through the action of the Endocannabinoid System.  As the most recently discovered, and least well known, bodily system, the ECS offers the potential for many improvements in human health.

Go to our website for other posts, some FAQs and to check out our products.  Comments on this post are welcome.

PrevPreviousCBD – A Practical Explanation
NextHow Much CBD Should I Take?Next

These statements have not been evaluated by the Food and Drug Administration.  These products are not intended to diagnose, treat cure or prevent any disease.

All products contain less than .3% THC by weight.