It All Starts with Hemp!

It all starts with hemp.  While CBD is found in both hemp and marijuana, all of our CBD, and the overwhelming majority of the CBD that is sold, comes from hemp.  So it is interesting to see where our hemp comes from.  Here are some results from the Hemp Report brought to you by the Hemp Industry Daily. 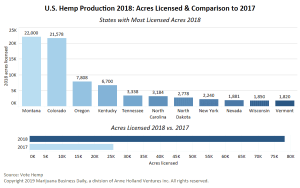 While hemp will grow pretty much anywhere, there was no legal organized cultivation until 2013 In that year Colorado began production.  Kentucky followed in 2014 with the passage of the farm bill, the groundbreaking legislation which Kentucky Senators McConnell and Paul were instrumental in passing.  So, it’s not surprising to see that they are the top two hemp producing states in the country.  All of the CBD we use at 7 Mountains comes from industrial hemp grown in Kentucky.

But it probably is surprising not to see California in the mix.  While the Golden State does lead the nation in production of marijuana, hemp processing was only legalized in 2016 and no hemp farmers have been licensed.  I was also surprised to find out that Virginia has banned hemp cultivation.  Surprising for a state that used to grow 23,000 acres of tobacco.

Prior to the passage of the 2014 Farm Bill hemp was considered a class one drug along with heroin and LSD.  While that position was patently ridiculous, it’s good to see that things can change for the better.

Unfortunately, hemp production is still heavily regulated at both the growing and processing stages.  In Colorado, for example, there is no restriction on the number acres can be grown and no requirements for getting a processing license.  (I know people who process in Colorado and I can tell you that once they are up and running the processors are very thoroughly regulated!)

In Oregon, on the other hand, separate licenses are required both to grow and to process hemp.  Once planted, 100% of the hemp in the field is tested for THC content.

Restriction exist on a state by state basis with regard to the number of acres that can be planted, who can process hemp, which parts of the plant can be processed and more.  Because of these restrictions, the market is far from being as predictable as markets for other commodity products.

In North Dakota, for example, there is only one licensed processor.  The price of hemp flower (the most CBD-rich part of the plant) varies from $25 in North Carolina to $100 in New York.  In some states, there are restrictions on processing flowers.  And in nearly every state, there is a shortage of hemp fiber processors.  It’s easy to overlook this fact but it is fiber processing that will result in major environmental advantages:  hemp can replace plastic in an unimaginable range of products.

So, while acres devoted to hemp are only a drop in the bucket (notice the total acreage devoted to corn, cotton and soybeans!), the industry is clearly on the upswing.  As more processors come on line, the more sense it will make for farmers to plant more hemp and we will undoubtedly begin to see a positive cycle in this important industry.

And remember, for the best CBD products at the best prices, always check out 7 Mountains!

These statements have not been evaluated by the Food and Drug Administration.  These products are not intended to diagnose, treat cure or prevent any disease.

All products contain less than .3% THC by weight.

Item added to your cart

Continue Shopping Go To The Cart

Cookies make the site experience better. This is to let you know that we use them. We don't do anything with the info.